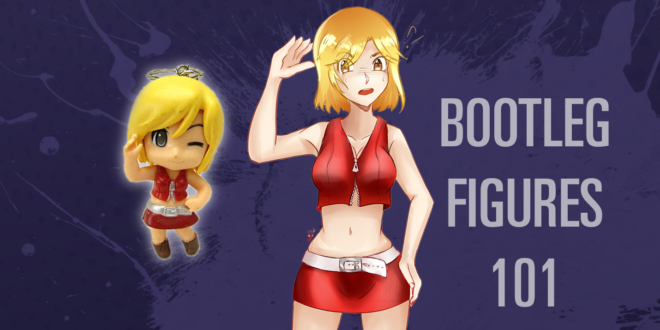 By now, you’ve likely decided that you’re interested in buying some sort of figure that embodies your favorite VOCALOID character in a three-dimensional, physical form. If not, you may want to check out our first article in the Figure Collecting series to get an idea of just what the figure collecting world has to offer. The only downfall? Bootleg figures.

But fear not, we’re here to help you navigate the world of horrible reproductions and even those sneaky bootlegs that can fool the untrained eye.

What’s a Bootleg Figure and Why are Bootlegs Bad?

A bootleg figure is one that isn’t made by the manufacturer. Due to this, they often lack the quality of the official products. This isn’t the only reason to not buy bootlegs though. They also don’t support the companies behind the figure and sales don’t go towards the total sales of the product.

Say you buy a bootleg version of the upcoming MEIKO figma. Now this is the first time she’s getting any kind of figure since her Nendoroid release, so it’s even more important than usual. The figma sales are really going to help determine just what MEIKO will get in the future. By buying a bootleg, that’s one less sale counted when every sale counts. Now multiply that by several hundred at the very least and several hundred thousand or more at the most. Crypton sees less money being made and stops focusing on MEIKO because Miku, Rin, and Len can get them more money.

The same goes for any bootleg purchase. By buying a bootleg, you’re telling figure companies that you would rather buy a lower quality figure than put money towards one they’ve worked hard on. Bootlegs are a slap in the face to figure manufacturers and the companies that allow their characters to be turned into figures.

How to Identify A Bootleg

Sometimes it’s easy to point at a figure and go “That’s a bootleg.” Other times, it’s a bit more complicated.

Here are a few dead giveaways to look for when purchasing:

The paint job is bad at best and completely wrong at the worst. Ever seen MEIKO with yellow hair? Not on any official merchandise.

The sculpt is wrong. There is no way to describe the horror of some bootlegs. Whether it is horribly off or just slightly wrong, bootlegs often don’t look like their legit counterparts. As Good Smile Company moves production of their figures to Japan, it gets harder to make bootlegs, since no one can grab the left-over cast used to create the figure.

Missing or added items. Sometimes, bootlegs fail to come with all of the items that the original should, and other times, they come with more. If possible, look up the figure you’re buying to see what it comes with and compare it to what you can see in the box. Should you be buying online, you can compare photos of the listing to photos on the official product page.

Nendoroids that aren’t pose-able. This seems to be the theme of quite a large amount of bootlegs nowadays. The people making the fakes will make figures with no moving parts and poses based on the product photos Good Smile Company provides. Nendoroids don’t work like that. Ever.

Brand new and super cheap. Unless someone is desperate to quickly downsize their collection, you’ll rarely find a brand new figure for dirt cheap. There are some exceptions to this rule (such as unpopular figures that stores are trying to get off their shelves) but the usual rule is if the figure is being sold on somewhere like Ebay for way under market value and it’s brand new, don’t go for it.

Take the box on the right as one of the worst bootlegs you could ever find. We have the GSC and Hatsune Miku logos, but there’s also large text reading “XINXHIDA” and “FOR THE LEAGUE OF LEGENDS.” And despite Miku not looking anything like Santa, the English text says that she is indeed “Hatsune Miku Santa Ver.”

Sometimes bootleggers don’t even try.  Though other times they’re pretty good at fooling the untrained eye.

Once you open the box and get a good look at the contents (or see pictures of the opened figure online), there are some smaller details that can hint at whether or not you picked up a bootleg. One of the biggest signs of a bootleg is missing copyright information. EVERY Nendoroid and figma stand has copyright information on it.

In addition to the missing print, you’ve also likely noticed that the bootleg figma stand is rather murky. Though stands are not always perfectly see through (they may be slightly translucent), they never look muddy or have random specks on them.

Should opening the box not be an option, just looking at it can give you a few clues. Oftentimes, the boxes themselves will either have missing details or be completely wrong. If you’re looking to buy a figure from someone other than a trusted dealer, make sure you know what the box looks like!

Examples include missing shiny parts, a completely wrong texture (Nendoroid Sakura Bloom: Bloomed in Japan Version has a rice paper-like texture to the box. So far, no bootlegs have this.), missing pictures or information, or even just a missing holographic sticker.

She's a huge VOCALOID fan, a figure collector, and an all around nerd. Hoshi's been in the VOCALOID fandom since 2008 and has been a hardcore VOCALOID fan since 2013.
@VocaHoshi
Previous Hatsune Miku: Dreamy Vocal Mobile Game Demoed At Miku Expo China, Launching December 2016
Next Luo Tianyi Concert with All 6 Vsinger Characters to Make an Appearance and More!