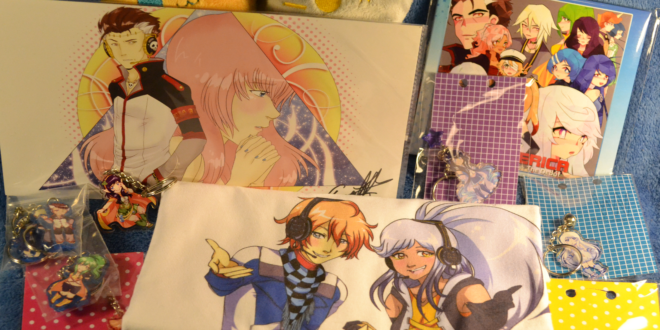 We’re on to part two of my (Hoshi’s) VOCAMERICA merch review! This time around, I’m reviewing all of the goodies that came with the Platinum package of the Kickstarter. While this doesn’t include everything (I was only able to choose four keychains out of the 12 available), it does include ALMOST everything. We have a lot to cover, though, so let’s get started! 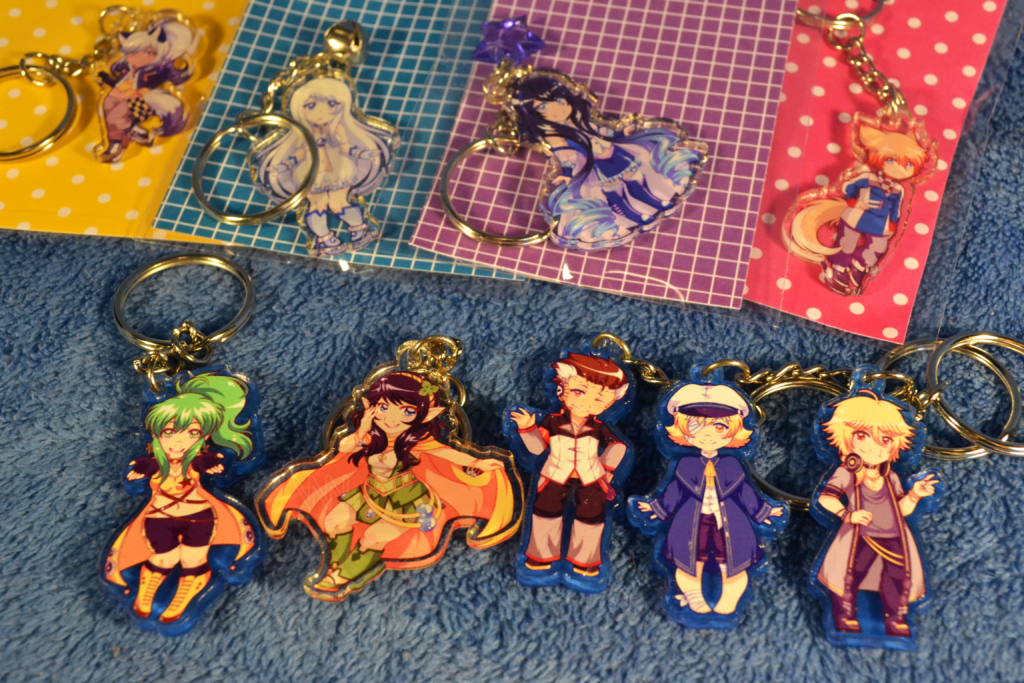 The lowest tier with physical merchandise gave out one keychain plus a ton of stretch goal extras, and every tier after that included keychains as well. So what better way to start off than with them? As mentioned before, I was able to choose four keychains, so I went with the Kickstarter exclusive alternate color versions of DEX, DAINA, Namida, and MAIKA. In addition to these, AVANNA, SONiKA, OLIVER, YOHIOloid, and Big AL were all given as stretch goal bonuses. So I have lots of keychain swag.

The four chosen keychains came packaged and some had bells or stars added to them. However, the Kickstarter backers all elected to free EmpathP of having to package all of the keychains, so the Kickstarter exclusives ones were in sealed bags.

The blue that you see on the keychains in the main image is removable, so don’t worry!

Each keychain is rather small but of incredibly high quality. They’re also all double sided, which is always nice.

On one side, the image shows through acrylic. However, on the other side, it is exposed. This is slightly worrisome, as in my past experience, exposed print can lead to the keychain getting scuffed and lead to there being holes in the image. I no longer use some of the acrylic phone charms I ordered because one was ruined just by my phone dealing with daily wear and tear.

Now the good news is I “sacrificed” a small section of one of the keychains and scratch tested it for everyone. And it turns out these are definitely more durable! How durable, I can’t say for sure, as the wear takes place over time. However, just to be safe, I’m not removing the clear plastic backing from the keychains that have it on.

But at the end of the day, most items like these do scratch and scuff eventually. Even a perfect acrylic keychain is going to take a hit from your keys abusing it. Overall, these keychains are definitely of high quality and should last you quite some time assuming you take care of them.

However, even if you plan to keep the clear backing on, you probably want to rid yourself of the blue. It’s rather ugly. Some people can remove it with ease but I found it to be a 50/50 shot for me. Sometimes, I could get off the blue backing without much trouble. Other times, I had to go strategic on it.

I found that grabbing it with a pin worked well, and once it was loose, I could pull it with my fingers. 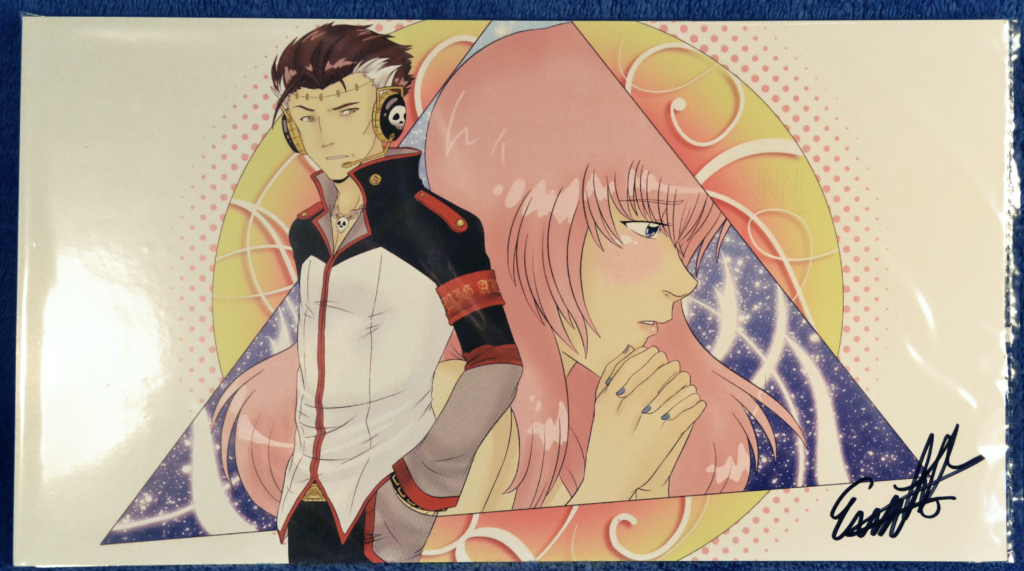 Almost all physical rewards packages also included an exclusive 10×5 art print signed by EmpathP. The beautiful print is put in plastic so that it stays nice and safe. The colors are perfection and very vibrant, so I’d definitely give the print quality a 10/10. I’m keeping mine in its plastic for right now, but definitely plan to get it framed later on. 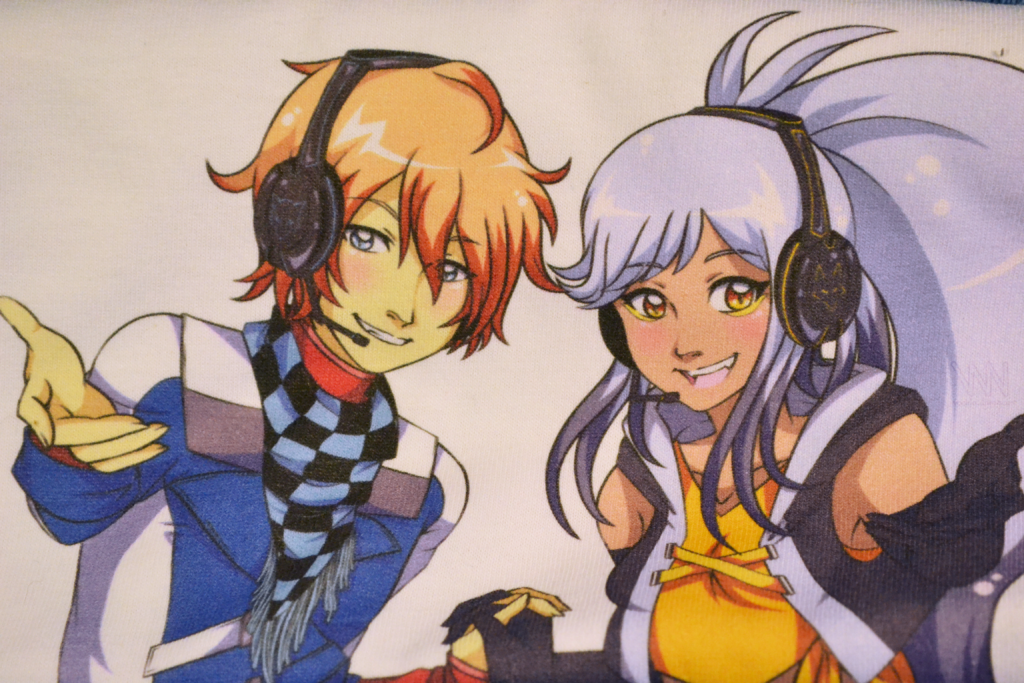 The next item from the rewards is actually the physical version of the album. However, I already covered that here. So we’re moving up one more tier into the one that gives a t-shirt!

Backers had the option of choosing between a shirt featuring the normal colors or a shirt featuring the alternate colors of DEX and DAINA. Non-backers buying merch on Storenvy or at the concert will only be able to buy the regular colored one. And, of course, only Kickstarter ones say “Official Backer.”

Overall, I absolutely love this shirt. It’s super comfortable and the print job on it is amazing. The colors are crisp, clear, and vibrant. I almost feel bad wearing it because it looks so good! If you want to show off your love for VOCAMERICA, the shirt is definitely something to consider wearing.

As for fit, it does seem a little bit more snug than some shirts. However, not so snug that your usual size will be too small. It just looks a bit neater in my opinion. It’s not a bulkier shirt like the ones fans are used to buying from other places in the West. 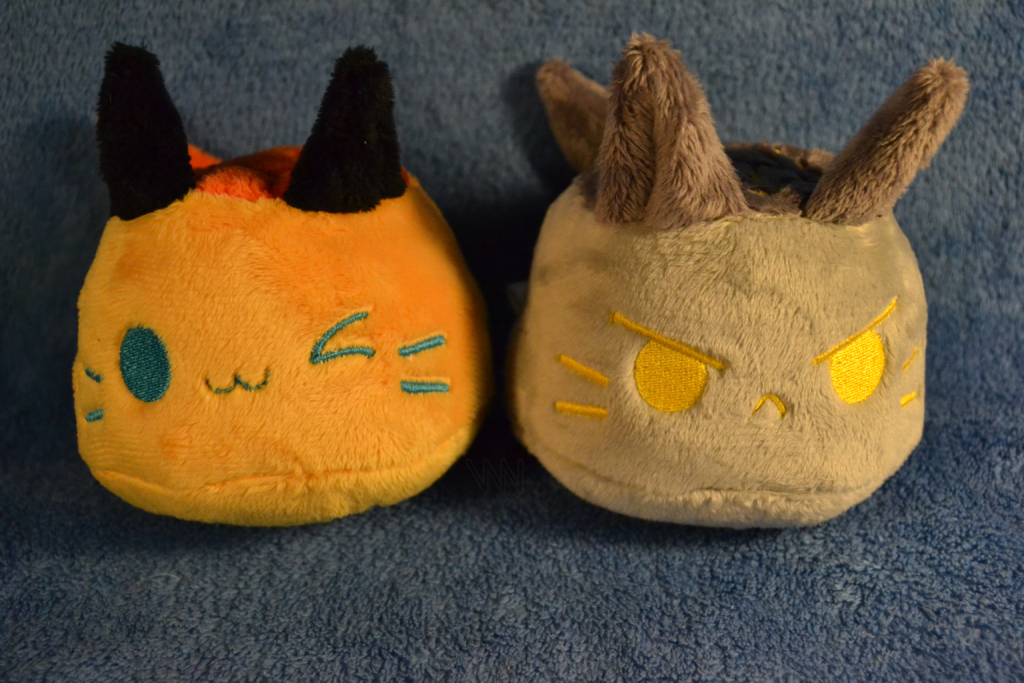 Full disclaimer: Only one of the two plushies comes with the Diamond Package. I just had a friend at VOCAMERICA grab me the other because you obviously need both. And I have zero regrets.

I was introduced to Neko Kitty Studio back when EmpathP first mentioned that she may commission plushies from the artists. I researched them for VNN and the rest is history. Needless to say, these two are part of a small army of pudding plushies.

The plushies cost $30 USD when bought at the concerts. Neko Kitty Studio usually charges about $22 USD for a basic pudding plush, so factoring in that these have different tails, some pretty fancy embroidery, and use more colors than usual… I’d say $30 USD is quite the steal!

Like all pudding plushies, these two are made of super soft minky fabric. Even though they’re a bit on the small side, they’re super cuddly nonetheless and just look cute enough to snuggle. (If you’d like to see how big they are, check out EmpathP’s picture here.) You can fit these little guys on your head which leads to some super cute pictures, but they can also stack on top of each other to create some adorable little scenes!

The attention to detail on these plushes is absolutely amazing. The embroidered designs on the top are perfect even with the sharp and small points on the wolf’s fur on DEX. The feet on both are black but have a bit of a shimmer to them.

The chosen colors also fit DEX and DAINA perfectly. DAINA’s body is a yellow-orange fabric while the top of her body and her tail are orange. Her black ears really stand out against this coloration and make her look especially fox-like! In addition, her blue embroidered face as well as the blue logo on top look great as well.

DEX keeps to a grey color scheme. His body is a light grey while his ears, top, and tail are all a darker grey. But, just like DAINA, his logo and facial features are the color that his headphones glow. While DAINA’s headphones glow blue, DEX’s glow yellow. So his face and logo are a nice yellow color.

I particularly enjoy the facial expressions of the two. DAINA has a mischievous wink while DEX just looks grumpy. It gives the two so much personality and really makes them feel like a set.

Overall, these are two pieces of unique and adorable merchandise for DEX and DAINA fans. People are already hoping for a second order of the plushies as well!

Out of all the physical merchandise and even the CD, I can’t say I’m displeased with any of it. All of it is incredibly good quality and everything gives some love to Western VOCALOIDs. And, as most fans of the Western loids know, getting good merch of these guys and gals is rather difficult. Not only is VOCAMERICA bringing us a Western VOCALOID concert experience, but also some much needed merchandise of VOCALOIDs who don’t really see much.

I’ll definitely be grabbing the Tonio and Prima keychains when they’re released. From there, who knows what other merchandise will happen! But I’ll be looking forward to and eagerly awaiting for all of it!

While the pudding plushies aren’t available at the moment, the regular keychains, regular t-shirts, and album still are. Check them out at VOCAMERICA’s online store here to grab some goodies! They do ship internationally, so don’t worry!

As always, be sure to stay tuned to VNN for VOCAMERICA coverage as well as coverage of everything else going on in the world of vocal synths!

She's a huge VOCALOID fan, a figure collector, and an all around nerd. Hoshi's been in the VOCALOID fandom since 2008 and has been a hardcore VOCALOID fan since 2013.
@VocaHoshi
Previous Yuzuki Yukari and Tsurumaki Maki Make Their Anime Debut in Hagane Orchestra
Next PICTcake Announced Hatsune Miku Christmas Cakes, Now Available for Order!