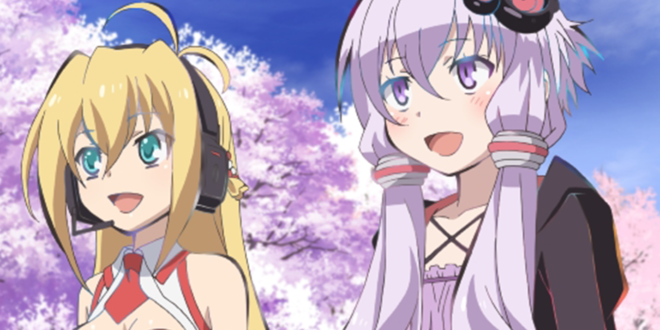 AHS’ Yuzuki Yukari and Tsurumaki Maki will make their anime debut in the Hagane Orchestra anime. The series is based on the mobile game created by Hanbit Ubiquitous Entertainment Inc.

Hagane Orchestra is a mobile game created by Hanbit Ubiquitous Entertainment Inc. In the game, you ride in a tank or robot called a “Hagane” to fight your enemies. In addition to appearing as tutorial guides in the game, Maiki and Yukari are also playable characters with their own custom Hagane. These Hagane are based on their costumes while their weapons are based on the character items of the two; Yukari has a chainsaw while Maki has an electric guitar.

The Hagane Orchestra anime is a series of short, 4-5 minutes long episodes that focus on the interactions between the main characters. Yukari and Maki won’t have roles in all twelve of the episodes, six of which have already aired, but will appear in Episode 8. The two will even be voiced by their Voiceroid+ software! Episode 8 will air on November 27 on TOKYO MX.

For more information, check out the following websites.

As always, be sure to stay tuned to VNN for any updates as well!