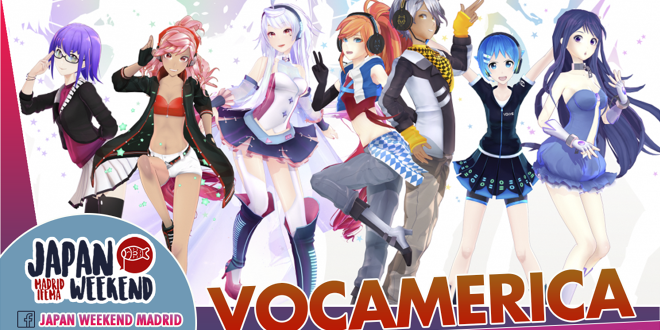 VOCAMERICA Updates: 2nd Concert in Europe and Details on Stage 2

VOCAMERICA saw a successful year in 2017, with concert performances across America and the first concert in Europe at Aki no Matsuri in Switzerland. We have more good news for European fans, as the next VOCAMERICA concert will be returning to Europe for it’s first show of 2018 at Japan Weekend in Madrid, Spain!

We present to you our 4th guest at Japan Weekend Madrid, VOCAMERICA, coming to Spain for the first time! Don’t miss the first ever VOCALOID-certified fan concert featuring Western vocal synthesizers.
INFO: http://japanweekend.com/madrid/vocamerica/

The manager of VOCAMERICA, EmpathP, has said that the two VOCAMERICA concerts held at Japan Weekend will be slightly different, so each performance will be unique.

#VOCAMERICA concert Numero Uno for @Japan_Weekend is now all put together and ready for the full render! Time to work on Concert Numero Dos! Each concert will be slightly different with different songs and performances, making for 2 unique musical experiences!

For 2018, EmpathP has stated that VOCAMERICA will be entering ‘Stage 2’ of production, which means that the concert will be getting various upgrades to improve the experience for concert goers. These upgrades include a higher frame rate, concert shaders and lighting, maps and sound mixing updates.

Check out the render and mixing previews below to get a flavour for what’s to come!

First off, here is a direct comparison between the 2017 render and the 2018 render of DEX and DAINA performing FADE by CircusP.

I know I said I wasn't really gonna post too many render update previews for #VOCAMERICA….but I lied XD You guys need to see this, because it's awesome and it shows the juxtaposition between our previous look and our newest look. pic.twitter.com/709qoi1sPY

Here are some more previews of the VOCAMERICA performers, DAINA and Maika.

Next, if you want to see what the performers look like in motion, check out the GIF and video below!

This first preview features Ruby and the UTAU, Viki Hopper performing together.

#VOCAMERICA first updates of stage 2, coming in February of 2018! pic.twitter.com/13hQxVJb5L

To get a taste of the mixing updates, you can listen to the following preview featuring FADE by CircusP, and mixed by Marvin Valentin.

There will also be more performers added to VOCAMERICA this year, including YOHIOloid. Check out this preview of YOHIOloid’s model, created by the project’s artists, YoiStyle and Akuo.

Last but not least, Akuo has also shared a preview of some new VOCAMERICA merchandise. Check out these adorable chibi drawings of the VOCAMERICA performers, which will be available to purchase as keychains at future concerts. Akuo has also promised that he will make keychains for the other performers, such as Oliver, Sonika, Tonio, Prima, in the future.

Chibi set collection of #VOCAMERICA performers for keychains. They will be available for the upcoming concerts, stay tuned! pic.twitter.com/PprPjbJUeL

In addition to the concert in Spain, there are 3 more VOCAMERICA appearances announced so far in 2018.

Check out the list below for the upcoming appearances of VOCAMERICA, though please note that not all of these appearances will include a concert.

Jade is an artist, writer and musician based in the UK, who has a particular fondness for Vocaloids. Her favourite loids are Fukase, Oliver, Gumi and IA.
@jadekaibap
Previous AHS December 2017 News Roundup Part 1: VOCALOMAKETS
Next Snow Miku 2018 Updates: Exhibitors, More Goods, Live Stage Schedules And More