As February ends and spring draws near, it’s time for VSinger girls to get some new clothes for the new season! And what better way to give the girls new clothes than to hold a spring costume design contest?

VSinger is collaborating with the costume selling company “AScosing” and the ACG community website “BCY.net” painting section to hold a spring costume design contest for the female VSinger VOCALOIDs Luo Tianyi, YANHE, YueZheng Ling, and Mo QingXian. While QingXian does not have a VOCALOID voice bank, VSinger has mentioned previously that they do plan to eventually make one for her as well as for the other VSinger characters.

The winning design or designs will be made into real products and sold by AScosing. In addition, the winners will receive a cash prize.

There is an option to design a single VOCALOID or design all four of the characters. In the event all four characters are designed, artists are required to have the character designs relate in some way and form a series. You cannot design four costumes that do not go together.

For more information, see the the contest rules below. 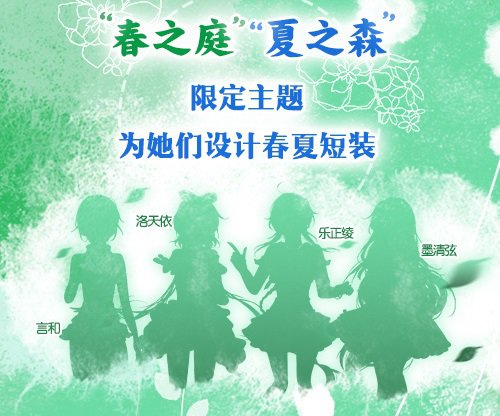 *Entries can only receive the Team Prize or the Single Prize.