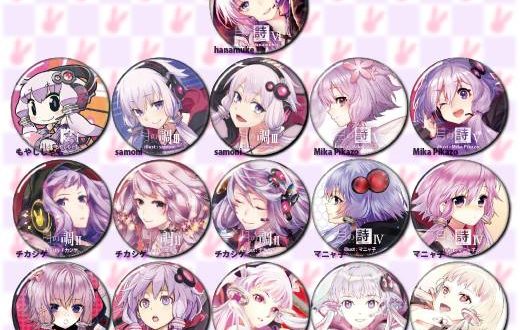 The semi-annual dōjinshi fair, Comiket 91, took place these past three days at the Tokyo Big Sight from December 29th to the 31st. Of particular interest to VOCALOID fans was Yuzuki Yukari’s presence at the fair, with two major Yukari-centered groups on site selling their promotional goods! Check them and their Yukari merchandise out below!

The first of such groups was Team MAKETS, a dōjin circle formed by the members of VOCALOMAKETS. They attended Comiket 91 on the 31st to promote the 月の彩 I (Tsuki no Irodori I, “Colors of the Moon I”) collection of album artwork. The collection includes the artwork used as book jackets for the following albums:

Furthermore, those who purchased the jacket art collection would receive their choice of a can badge bearing any one of the featured designs for free (while supplies lasted)! That’s a whopping 21 different badges covering the works of no less than 10 different artists!

The whole package was on sale at Comiket 91 for ￥1,000 JPY (about $10 USD). Talk about a deal! Those who could not attend the event can still purchase the art collection for ￥1,493 JPY (about $15 USD) plus tax online at Toranoana (Japanese).

As previously covered on VNN, the Yuzuki Yukari Racing Project team was also present at Comiket 91 on the 31st to distribute the first set of Racing Yukari merch!

Those present at the event could purchase the entire set of goods for ￥4,000 JPY (about $40 USD), while those who could not make it can get another chance at this year’s winter Wonder Festival on February 19! For more information on Racing Yukari and the project’s merchandise, check out our previous article, and you can also follow them on Facebook and Twitter!

Wait, what’s that? You’ve read this far but say that you don’t know who Yuzuki Yukari is? Well then, time to educate yourself on VocaDB, stat!

Hello! You can call me Marumain, and I serve as a translator between VNN in English and VNN in Japanese, translating articles between the two languages. I love pretty much every Vocaloid, though I consider MAIKA to be my favorite!
@MarumainElectro
Previous Tone Rion V4 & the New Yumemi Nemu VOCALOID!
Next Luo Tianyi’s & Yuezheng Ling’s Performance on Hunan TV 2017!