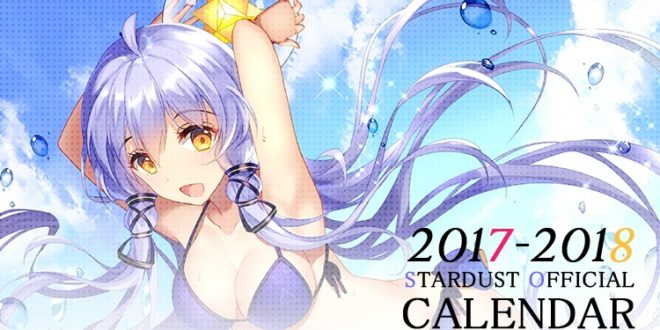 During the Olympics in Rio, Stardust’s official Weibo posted an image featuring Stardust in swimwear to show support for the Olympic swimming team. They also revealed the production of a calendar.

On September 10th, they announced that the calendar is now open for pre-order. From the list of artists, you may recognize a few of them, as some of these artists were also included in the Stardust debut art book titled  “银河美术馆” (Gallery of Galaxy). Throughout 2017, you will be able to find twelve beautiful and lovely Stardust illustrations to remember.

The desk calendar is up for pre-order on Taobao at a price of ¥40 RMB ($6 USD) and will begin shipment in early October.

A virtual singer lover with a dream of connecting the world of virtual singers together through VNN. Monds is also a huge rhythm game fan/player on his spare time.
@monds1234
Previous Hatsune Miku: Magical Mirai 2017 Announced
Next “IA PARTY A GO-GO” Concert Screening and Lia Live at AFA in Indonesia with VNN in Attendance!