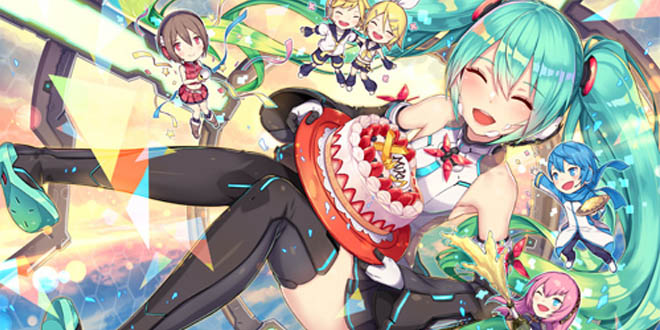 The first of seven “Hatsune Miku 10th Anniversary PPP-Party in AEON” events will be taking place this weekend in LakeTown! The event will include special goods like an illustration book entitled ThanX, which will feature the works of ten different illustrators plus many exclusive goods based on the illustrations provided by said illustrators. They’ll also have live DJ concerts performed by famous VOCALOID producers, and even a 3-meter-tall jumbo Mikudayo! 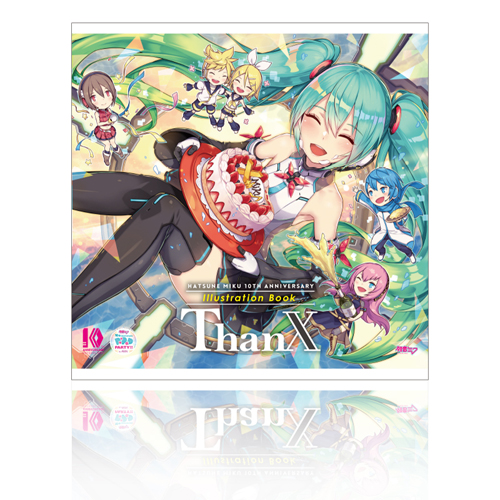 The featured item for this event is an illustration book showcasing the works of ten different artists. Throughout the publication, said artists share stories about how they discovered Miku, and give some pointers on drawing her for future Miku artists.

The “X” in the title is meant to not only represent the number 10, but also to convey the sense of “crossing;” through Miku, many people’s paths have crossed and many friendships were formed, crossing even cultural and language barriers. The “Hatsune Miku 10th Anniversary PPP-Party in AEON” isn’t so much a celebration of Miku, but rather a thank-you party for the digital diva for all that she has done for her fans all around the world.

The featured artists are:

For every ¥1,000 JPY (about $10 USD) you spend at a store on the day of an event, you’ll get a free illustration card! There are ten to collect, and which one you get is determined at random.

Finally, the theme song for the event is “TODAY THE FUTURE,” composed by Harihara Tsubasa and other members of ELS!

The theme of “TODAY THE FUTURE” is about how we all initially set out in pursuit of our dreams on our own, struggling and fighting all alone. But along the way, we eventually meet and learn to grow with a great number of other people, no longer being alone. In “TODAY THE FUTURE,” Miku, too, learns this lesson, and sets out in pursuit of her previously abandoned dreams with a newfound sense of direction, learning to face the future with a smile.

Illustrations for the song were provided by あごなすび (Agonasubi), and the animations were handled by 駿 (Shun), who bring this magnificent portrayal of Miku to life in the outstanding PV for “TODAY THE FUTURE.”

She's a huge VOCALOID fan, a figure collector, and an all around nerd. Hoshi's been in the VOCALOID fandom since 2008 and has been a hardcore VOCALOID fan since 2013.
@VocaHoshi
Previous Vsinger’s Live Concert Merchandise
Next IA in Chile!