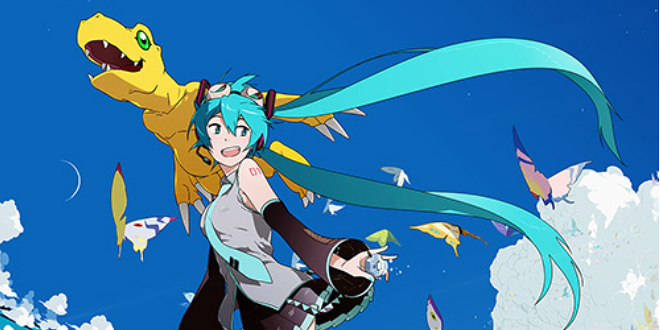 In celebration of Digimon Adventure’s 20th anniversary, a special collaboration with virtual diva Hatsune Miku was announced back on March 5th, and now we get some updates on goods!

A Digital Diva in a Digital World!

The main visual created by Atsuya Uki portrays Miku floating together with Agumon. This image mirrors the first visual released for the Digimon Tri movie series in which the Digidestined (chosen children) float in the sky.

Miku is wearing the main character Taichi‘s goggles in addition to holding his Digivice, the tool the children use in the series to evolve the partner Digimon.

The butterflies in the image refer to the opening theme Butter-Fly, while the edges of the wings link back to Miku being digital also.

A variety of goods based on the Miku ✕ Agumon visual will be introduced during DigiFes 2019 this August. Those include a B2 Tapestry (2100 JPY), an Acrylic Stand (1600 JPY), and a CD shaped memo with an illustrated case included (980 JPY)

These goods will be sold during DigiFes 2019, an exclusively Digimon-themed event that takes place at the Maihama Amphitheater, located in the Tokyo Disney Resort®.
Tickets are available through lottery and cost 8500 Yen.

The above times are in JST (Japanese Standard Time).

The Adventure Series’ cast is at the event, as well as Ayumi Miyazaki (composer of the Digivolution theme), and Ai Maeda (responsible for several ending themes).

Lune☯n has been a fan of Vocaloid and MikuMikuDance since 2010, spends most of the time playing video games, watching anime and uploading covers with a variety of VOCALOID to YouTube.
Previous Siinamota’s Lost Album Therefore. Pre-sale and Release
Next Nendoroid Hatsune Miku: Magical Mirai 2018 Ver. Announced For Presale at Magical Mirai 2019