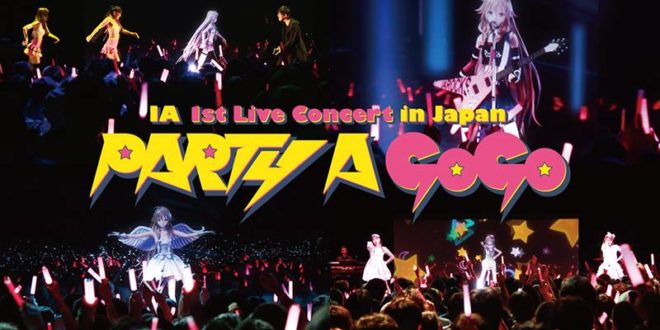 In case you missed it, 1st Place released a Blu-ray of the IA PARTY A GO-GO live concert on January 25th. (More information can be found on this here.) If you were still unsure if it was worth it or not, then I (Monds) will be giving my thoughts on it! 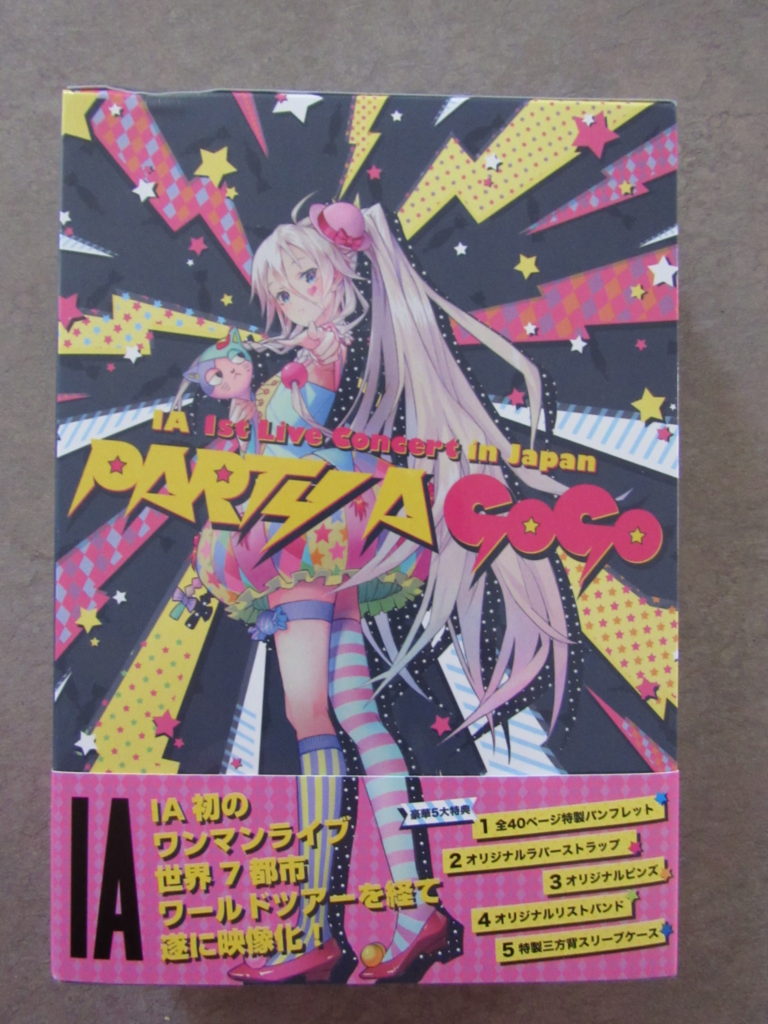 As always, when buying VOCALOID albums or DVD/Blu-rays, everyone loves the extras that come with them. In the IA PAGG Blu-ray, this is no exception. It is one of those that slide out from the side boxes, so it’s very easy to remove everything without too much trouble. Inside you get a few things: the Blu-ray (of course), some goodies, as well as a nice booklet.

There are a few things inside the box that comes packed in a nice cardboard piece to keep everything protected and organised.

First, there’s a wristband that you have a possibility of receiving in different colors. In my case, I got the pink one, which is great since I happen to enjoy the bright neon pink. However, you don’t have a choice in the color. 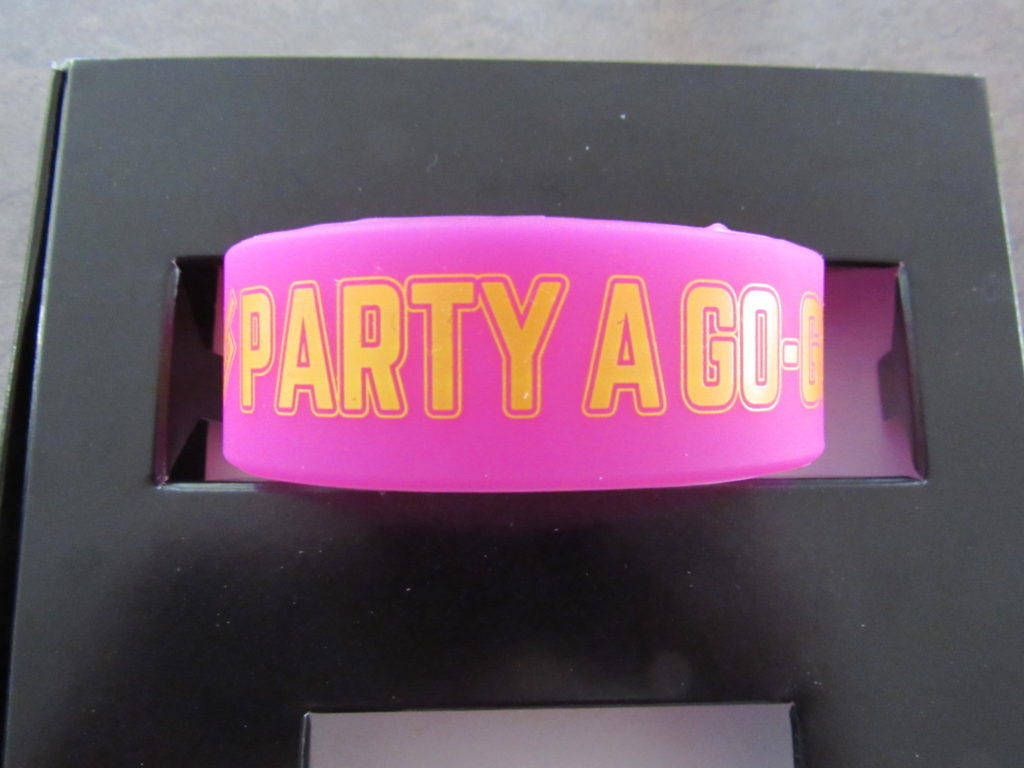 Second is a keychain. If you love keychains like I do then this one will not disappoint. The quality is great, and the details and colors are really well done. As someone who likes to grab as many keychains for VOCALOID as I can find, this is one of the better rubbers ones I have. I also like the choice of outfit given to her for the keychain due to it having a multitude of colors, which is sure to stand out from the rest of them.

Third is a metal IA pin. I was quite surprised at how shiny and high quality this was because sometimes with these, you may end up having a sort of scratched look on the metal or the metal not being very reflective. This is not the case here. 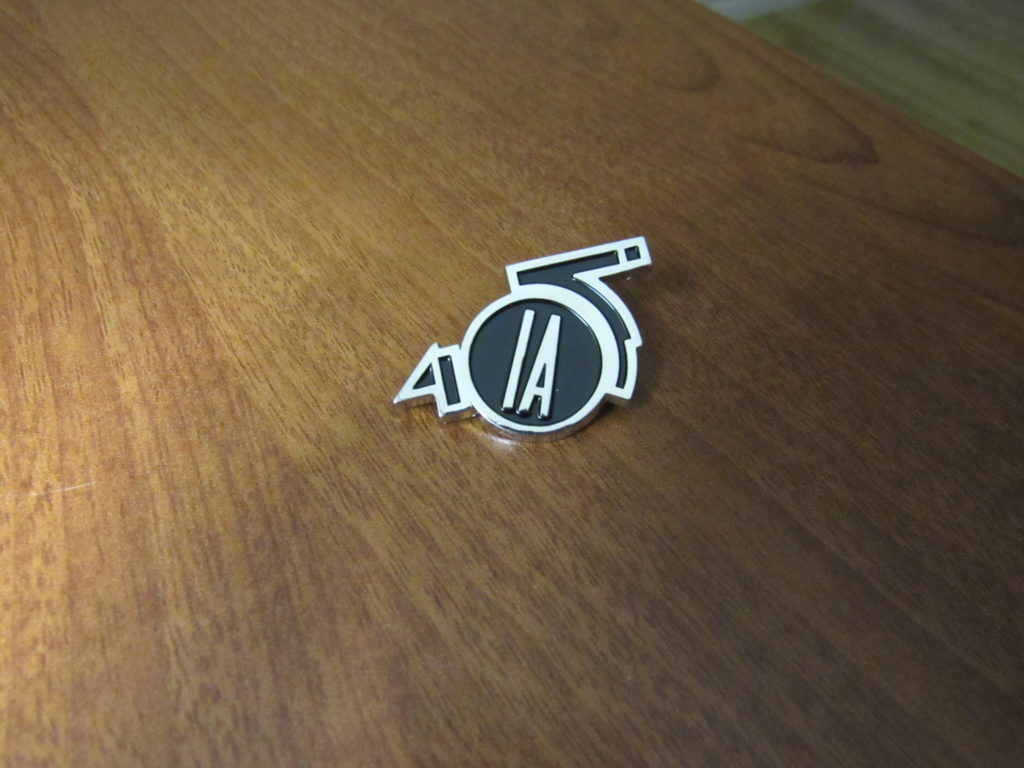 Inside we also have a 40-page booklet filled with high resolution images of shots taken from the live show. If you don’t ever have time to watch the whole thing and just want a quick glimpse before heading off to work or school, then this gives you an idea! All joking aside, this is a nice booklet to have and to look through from time to time, regardless if you have seen the concert or not.  It also has a page displaying her live outfits as well, which is a nice addition. Don’t worry for those of you who like ONE — there is some ONE as well!

Note: Depending on where you ordered from, you had the chance to get a different bonus with your pre-order: One of the following three keychains.

Once you’ve spent half an hour looking through all the stuff, you may be thinking… half an hour? Well, yes! If you are like me and need to really look closely at everything and enjoy every part of your merchandise, then you will see in no time that half an hour will have passed! Now you can go directly to opening up the Blu-ray case and taking that disc and putting it in your player! Yes, it is really that simple!

I have to add, I am quite enjoying how colorful this whole thing is. I mean, just look at it — COLORS! If you are familiar with IA though, this should not be a surprise, especially considering the outfit she is wearing on the cover. Also, those cats don’t seem very impressed.

For this part I am going to talk about the concert itself more than the actual watching part since I have not had the chance myself to actually see the live show in person. Although, hopefully I will in the upcoming years. If I do, you can expect some coverage from me again!

The first thing I have to say is how the concert is set up. Unlike your typical concert where it’s kind of just a singer or concert and they have a tracklist to go through from start to end with a few added things in between, this one goes full on with a variety of things. I will split this into parts due to how the concert is structured.

To begin, the opening of the concert had me hooked already. There is nothing better than a cool intro to get you pumped for what’s to come. What I found interesting is that although there were songs I was familiar with such as “SEE THE LIGHTS” and “We gotta run” among some of my favorites, each song had an extra touch added to them. Instead of having IA sing by herself, for some songs she would have dancers dancing alongside her. Others things that were different which I quite enjoyed were that they also had something added like a small solo or a remixed part! It wasn’t enough to detract completely from the song, but something fresh that would make me go “Oh! This sounds good.” There was even one song, “夜咄ディセイブ,” that had a group of “breakdancers” throughout the song, and some of them were as young as 8-10 years old by the looks of it. Now this is something that for a VOCALOID concert I found to be cool. I imagine it was quite an experience for them as well, and seeing them go at such an age was awesome!

After that we had “GO BACK TO IA” where it began with ONE talking to the crowd, introducing herself and explaining what “GO BACK TO IA” would entail. They had a sort of countdown from the years of 2015-2011 where they would play a song from each period with the years on screen in between each song. It was definitely a nice touch to show the past years of IA! We also had IA and ONE on stage for “Into Starlight.” After that was over, we then had another few songs with IA. IA also interacted with the crowd many times towards the end and it was great. It felt like she was truly saying goodbye and was a bit sad, actually. But thankfully, I have the Blu-ray and can just watch it again, although being there would be a different story.

Of course the fans loved it, and they gave an encore which was as good as the rest of the concert, followed by a final goodbye from IA.

I really enjoyed the structure of the concert as to how it was split up in parts and makes every song have its own purpose. It made every one of them feel different from the next. This kept it exciting the whole way due to not knowing what was coming next. Also, having many special guests (such as TeddyLoid, JMC, and out of service, to name a few) right there on stage with her during the songs were awesome. The addition of dancers and others singing with her gave it a much more lively environment, as well as added a layer of realism and interaction to the concert.

On the subject of interaction, IA would often speak to the crowd, and not just a few words but many sentences. On top of communication, IA was often found pointing towards the band members or getting up close to them. At some point when the guitarist would be playing a solo, IA even started playing air guitar and rocking out to it! This whole experience of interaction with the crowd on top of the awesome effects induced the feeling of seeing a real person singing with their band, where oftentimes they speak and interact with the crowd during almost every song and in between them. It made it much more engaging, and before I knew it, the concert was over.

Also, you can’t resist that sweet voice of IA! When she would speak, it was very nice to hear. Of course, she has a sweet voice while singing, but speaking is something we don’t see too often. (Keep in mind that this was before IA Talks was made available for a trial.) After watching the concert, it had me even more excited to get a chance to see the live show in the future!

For more information on the tracklist and rewards, you can check out 1st Place’s website here.

A virtual singer lover with a dream of connecting the world of virtual singers together through VNN. Monds is also a huge rhythm game fan/player on his spare time.
@monds1234
Previous Vsinger está a Realizar um Concurso de Design e Música!
Next “Aria On the Radio” Submissions Open!