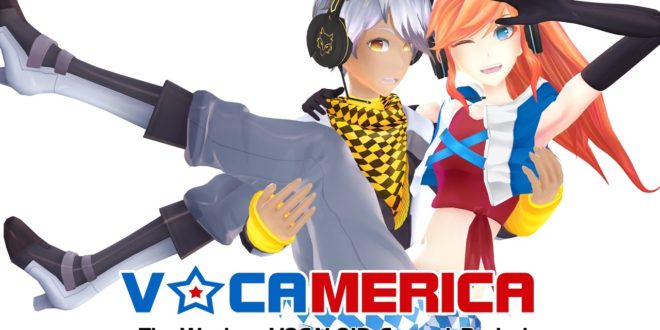 At long last, there’s a list of quite a few locations where VOCAMERICA will be! Some of these will be the full concert while others will be educational expos where EmpathP and friends host panels about VOCALOID!

There won’t be a concert at this convention, but there will be a panel hosted by EmpathP and CircusP.

We have one more convention to announce for tonight my dears! I will be attending ETSUcon as a guest and meeting up with my good friend MystSaphyr to give some panels and give out hugs!

EmpathP will be a programming guest and teaching fans about VOCALOID, as well as talking about what’s next for VOCAMERICA. MystSaphyr will also be there!

Hello my darlings! I'm happy to announce that VOCAMERICA will be giving a special encore performance of our first show…

The Kigacon concert will be an encore performance of the first VOCAMERICA concert shown at Nekocon. This will be the last chance to see VOCAMERICA’s debut concert.

The Tora-Con concert will be a brand-new concert. While it’ll still use some songs from the original concert, new songs will be added in and there will be new animations and effects.

Location: Near Chicago, IL
Dates: May 26th-28th (Possibly)
Concert on the 27th! (Possibly)

Most likely an encore of the Toracon performance. However, it’s not known for sure at this time.

This will be the first VOCAMERICA concert in Europe. However, EmpathP and VocalNexus need your help to get it going! There’s currently a crowdfunding campaign available. If enough money is raised, there will even be a live stream of this concert for everyone to see! So be sure to donate if you can.

She's a huge VOCALOID fan, a figure collector, and an all around nerd. Hoshi's been in the VOCALOID fandom since 2008 and has been a hardcore VOCALOID fan since 2013.
@VocaHoshi
Previous Yuezheng Longya’s First Demo “In Your Breath” Released!
Next IA Plushie Now Available Internationally!