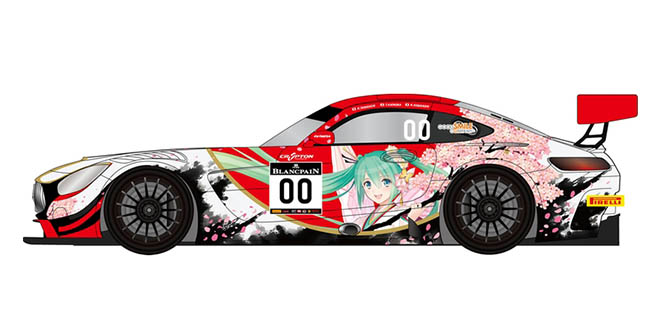 Good Smile Racing fans are likely well aware of the special addition to this season’s races. In addition to the regular runs in their 10th SUPER GT season, the crew is taking it a step further. They’re participating in the “Total 24 Hours of SPA” endurance series next, from July 27th to the 30th! And this special occasion came with a special Miku design which, of course, calls for a special car as well! Now, fans can order a miniature version of the Hatsune Miku AMG 2017 SPA24H ver. car for themselves!

This car features the special design of Miku made just for the event! Since she’s outside of Japan for the Total 24 Hours of SPA, she’s wearing an outfit that’s more Japanese styled than her usual Racing Miku costumes.

For more information on the event, as well as special Personal Sponsorship Courses just for the Total 24 Hours of SPA, check out MikuFan’s article.

About the Miniature Car

It’s a painted 1/32 scale ABS miniature car meant to perfectly replicate the real deal. It’s approximately 140 mm in length. While there aren’t any photos of the finished product of this particular car, fans can check out previous miniatures like the Hatsune Miku AMG: 2017 Season Opening Victory ver. for an idea of what to expect. (And if you love that car, it’s still available on Tokyo Otaku Mode!)

She's a huge VOCALOID fan, a figure collector, and an all around nerd. Hoshi's been in the VOCALOID fandom since 2008 and has been a hardcore VOCALOID fan since 2013.
@VocaHoshi
Previous Vsinger X NetEase Mobile Game Collaboration
Next Into Starlight & Reload CD/DVD with AR Available!