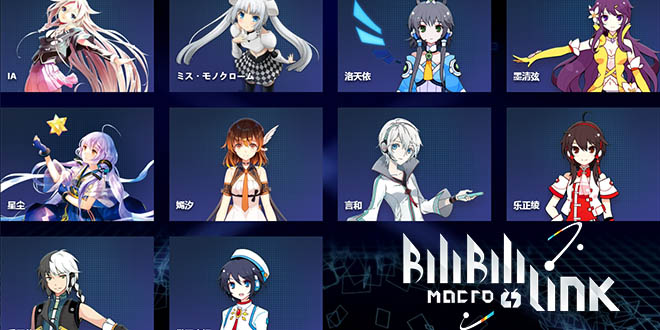 Last year at Bilibili Marco Link, Luo Tianyi made her appearance on stage. This would mark the first time that a VOCALOID made an appearance on BML. It seems that it was quite a success, since this year we are not only getting one VOCALOID, but also many of them alongside other virtual singers. Note that Miss Monochrome was there last year as well.

This year’s lineup is going to be the VOCALOIDs IA, Stardust, and all of Vsinger‘s VOCALOIDs. If that was not enough, there will also be Yan Xi from MUTA as well as Miss Monochrome. For any fans of virtual singers, this is a lineup that is definitely a MUST SEE if you can make it.

Bilibili Macro Link will take part on the weekend of July 21st-23rd. However, the virtual singers will be performing on July 21st and the event is titled “BILIBILI MACRO LINK-STAR PHASE × ANISONG WORLD MATSURI 2017.” BML will take place at the Shanghai Mercedes-Benz Arena in China and tickets will be available for purchase on June 16th. Get them fast since they are known to sell out quickly.

For those of you who don’t know what BML is, it’s a huge event that happens every year featuring many well-known artists and more!

A virtual singer lover with a dream of connecting the world of virtual singers together through VNN. Monds is also a huge rhythm game fan/player on his spare time.
@monds1234
Previous “Daughter of Evil” Musical Teaser & More!
Next Oster Project’s Love Ward feat. Hatsune Miku Announced For Just Dance 2018