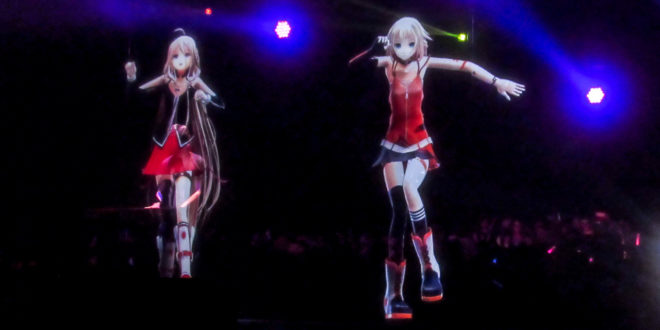 Last weekend, me (Monds) and Luna from our French division attended Otakuthon not long ago, where there was also an IA concert being held.

We will now bring you a recap of our weekend!

Of course you guys want to hear about the concert, but I will save the best for last. Although Luna had been to the convention last year, for me it was my first time attending. When arriving, the first thing I noticed was the location, it was a great location for a convention, so much so you could probably have one in the winter and it would be fine for everyone. The reason for this, is that the metro station is right beside it, and by right beside it, I mean you don’t even need to go outside. The most I had to go outside was to cross the street to get to my hotel from the metro station. You only need to go out the doors and you are in the metro. On top of that, there is access through an underground path that leads to a mall next door were there are restaurants, as well as some inside the con area, once again, no needing to go outside. So if going outside is not your thing, then this is perfect, since the convention was all in one building. If you didn’t mind going out, China town was right outside the door were you could try some great food!

Of course, what would be a convention without a place to buy merchandise and see some of the great work of the artists attending? I have to say that the dealer room, although crowded, had plenty of room to move around, the artists and sellers were combined in the same room, but that does not mean that there was not plenty to see, since the room was pretty big. There were tons of merchandise to purchase. You could also find 1st Place’s booth here, where we noticed had been quite busy throughout the weekend.

The convention was actually easy to find your way around, the first floor consisted of the entrance, where there were restaurants, the line up for your badge and so on. On the other side of that, a big room where a lot of cosplayers could go with plenty of sunlight to show off their cosplays and take some photo’s, there were many impressive cosplay’s to see here of all kinds. If you went upstairs to the second floor, you could find the artist/dealer room, as well as the event rooms such as the IA concert and more, essentially the big rooms. On the third floor you could find the panel rooms as well as a gaming room, which had a great variety, of course, it had your popular games such as, Smash bros, Overwatch and so on. Although there was one TV for IA/VT Colorful which I had the chance to try out myself. There was also a little area for Touhou games which I was personally happy to see. Overall, the convention was easy to navigate! Also note that since Montreal is a bilingual city, some panels were in French while others in English, which was fine for us due to being fluent in both, but it could be hit or miss if you do not speak both, but, this definitely does not detract from the overall experience.

Merchandise that we bought

Of course we could not attend a convention without getting some merchandise!

Note: I will be doing a little review of the merchandise in another article and Luna a review of IA/VT, stay tuned!

Of course this is what everyone has been waiting for! Since I already talked about the Blu-Ray in a past article, I am going to focus more on the experience than the concert setup. You can read our other article here for more information on the concert songs and setup. I have been to a few VOCALOID live concerts myself, as well as watched a few, so this will be my experience on this one. The one thing that I loved and have previously mentioned, was that I love that 1st Place adds a bit more to their concert than just IA, such as adding some of their own dancers and some effects around IA.

I was lucky enough to be sitting in the front row, right in front of the screen, and it was great! There were definitely not a lack of speakers, the sound was loud and clear, you could even feel the bass against your chest, as someone who likes a fair amount of bass, this was golden. There is nothing like watching the show live, the experience is on a whole other level. The screen was clear, the colors were vibrant, everything ran smoothly! There were also a lot of people in attendance. The room was practically full. If I had to guess the numbers, I would say it was around 2000. I had overheard a lot of people attending who were not familiar with IA, but judging by the crowds reaction and enthusiasm, it was like everyone there had seen IA many times, it was great to see everyone so involved, and this is good news for fans, since this could mean we could be getting many more of these! Of course you could purchase some glow sticks for the show beforehand, and it seemed like most people were prepared as well, since a majority of the audience had their sticks glowing and waving around. Everyone was standing up even though there were seats, the atmosphere was intense and everyone gave it their all!

In conclusion, I would definitely recommend anyone who can go see IA in concert that you do so, you will not be disappointed. IA also interacted with the crowd many times, which made it kind of sad when she said her goodbye’s at the end of the concert.

A virtual singer lover with a dream of connecting the world of virtual singers together through VNN. Monds is also a huge rhythm game fan/player on his spare time.
@monds1234
Previous Yuezheng Ling is Now Available in Zyon And Much More!
Next Quadimension Live Tour Official Album Available For Pre-order